They now pass three KNIGHTS impaled to a tree. With their feet off the ground, with one lance through the lot of them, they are skewered up like a barbecue.

Then they pass three KNIGHTS sitting on the ground with one enormous axe through their skulls. They look timorous.

SIR ROBIN rides on a little way with the music building up enormous and terrifying tension, until suddenly there standing before him is an enormous THREE-HEADED KNIGHT. 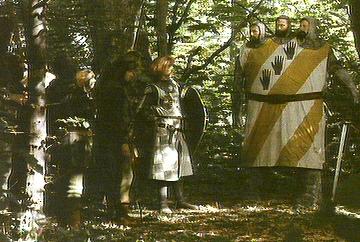 THREE HEADS: Halt! Who art thou?

ROBIN (to SINGERS): Shut up. Oh, nobody really. just passing through.

THREE HEADS: What do you want?

SINGERS: To fight and …

ROBIN: Shut up. Nothing really. Just to pass through, good Sir knight.

ROBIN: I am a Knight of King Arthur’s Round Table.

THREE HEADS: You are a Knight of the Round Table?

From now on the THREE HEADS speak individually.

FIRST HEAD: In that case I shall have to kill you.

SECOND HEAD: Shall I?

SECOND HEAD: I’m not sure.

MIDDLE HEAD (to FIRST): What do I think?

LEFT HEAD: I think kill him.

THIRD HEAD: Oh! let’s be nice to him. 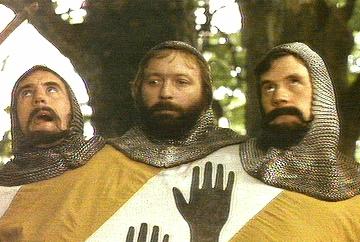 ROBIN: Perhaps I could …

FIRST HEAD: Oh! quick! get the sword out I want to cut his head off.

THIRD HEAD: Oh, cut your own head off.

SECOND HEAD: Yes - do us all a favor.

THIRD HEAD: Yapping on all the time.

SECOND HEAD: You’re lucky, you’re not next to him.

THIRD HEAD: What do you mean?

SECOND HEAD: Well only because you don’t brush my teeth …

THIRD HEAD: Oh! stop bickering and let’s go and have tea and biscuits.

FIRST HEAD: All right! All right! We’ll kill him first and then have tea and biscuits.

FIRST HEAD: All right! All right! not biscuits - but lets kill him anyway …

WIDE-SHOT THE 3-HEADED KNIGHT is alone.

THIRD HEAD: So he has! He’s scampered.