CUT TO Terry Gilliam’s sequence of Brueghel prints. Sounds of strange medieval music. Discordant and sparse. Wailings and groanings. The last picture mixes through into live action. BIG CLOSE UP of contorted face upside down. A leg falls across it. Creaking noise. The bodies lurch away from CAMERA to reveal they are amongst a huge pile of bodies on a swaying cart that is lumbering away from CAMERA. It is pulled by a couple of ragged, dirty emaciated WRETCHES. Behind the cart walks another MAN who looks slightly more prosperous, but only on the scale of complete and utter impoverishment. He wears a black hood and looks sinister. 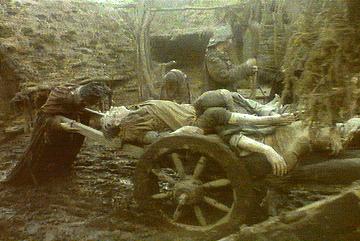 We follow the cart through a wretched, impoverished plague-ridden village. A few starved mongrels run about in the mud scavenging. In the open doorway of one house perhaps we jug glimpse a pair of legs dangling from the ceiling. In another doorway an OLD WOMAN is beating a cat against a wall rather like one does with a mat. The cart passes round a dead donkey or cow in the mud. And a MAN tied to a cart is being hammered to death by four NUNS with huge mallets.

There are legs sticking out of windows and doors. Two MEN are fighting in the mud - covered from head to foot in it. Another MAN is on his hands in knees shoveling mud into his mouth. We just catch sight of a MAN falling into a well.

LARGE MAN: Nothing… There’s your ninepence.

LARGE MAN: Yes he is. 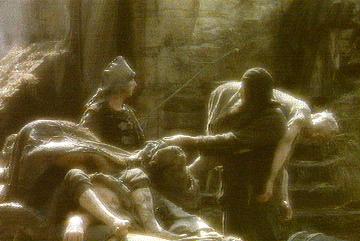 LARGE MAN: He will be soon. He’s very ill.

LARGE MAN: You’re not. You’ll be stone dead in a few minutes.

CART DRIVER: I can’t take him like this. It’s against regulations.

BODY: I don’t want to go on the cart.

LARGE MAN: Don’t be such a baby.

CART DRIVER: I can’t take him.

LARGE MAN: Do me a favor.

LARGE MAN: Well, can you hang around a couple of minutes. He won’t be long.

CART DRIVER: I promised I’d be at the Robinson’s. They’ve lost nine today.

LARGE MAN: When’s your next round?

LARGE MAN: You’re not fooling anyone you know.
(to CART DRIVER): Isn’t there anything you could do?

The CART DRIVER looks at the LARGE MAN for a moment. Then they both do a quick furtive look up and down the street. The CART DRIVER very swiftly brings up a club and hits the OLD MAN. (Out of shot but the singing stops after a loud bonk noise.)

LARGE MAN (handing over the money at last): Thanks very much.

CART DRIVER: That’s all right. See you on Thursday.

They turn … Suddenly all the village fall to their knees, touching forelocks etc. ARTHUR and PATSY ride into SHOT, slightly nose to the air, they ride through without acknowledging anybody. After they pass, the LARGE MAN turns to the CART DRIVER.

LARGE MAN: Who’s that then?

CART DRIVER (Grudgingly): I dunno, Must be a king.

CART DRIVER: He hasn’t got shit all over him.