CUT TO the glade in the forest again.

ARTHUR: Oh, Knights of Ni, here is your shrubbery. May we go now? 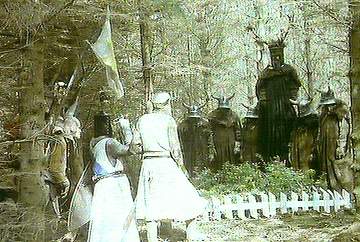 TALL KNIGHT: That is a good shrubbery. I like the laurels particularly - But there is one small problem.

ARTHUR: What is that?

TALL KNIGHT: We are now no longer the Knights Who Say Ni!

TALL KNIGHT: We are now the Knights Who Go Neeeow … wum … ping!

TALL KNIGHT: Therefore … we are no longer contractually bound by any agreements previously entered into by the Knights Who Say Ni!

TALL KNIGHT (to ARTHUR):_ Therefore, we must give you a test, a Test to satisfy the Knights who say Neeeow … wum … ping!

TALL KNIGHT: Firstly. You must get us another shrubbery!

ARTHUR: Not another shrubbery -

TALL KNIGHT: When you have found the shrubbery, place the shrubbery here, beside this shrubbery … only slightly higher, so you get a two-level effect with a path through the middle.

OTHER KNIGHTS: A path! A little path for the late Knights of Ni!

TALL KNIGHT: When you have found the shrubbery, then you must cut down the mightiest tree in the forest … with a herring.

ARTHUR: We shall do no such thing … let us pass!

ARTHUR: Cut down a tree with a herring? It can’t be done!

OTHER KNIGHTS (they all recoil in horror): Oh!

TALL KNIGHT: I cannot tell you. Suffice to say is one of the words the Knights of Ni! cannot hear!

ARTHUR: How can we not say the word, if you don’t tell us what it is?

TALL KNIGHT (cringing in fear): You said it again!

Suddenly singing is heard from deep in the forest.

SIR ROBIN’S SINGERS: Bravely good Sir Robin was not at all afraid To have his eyeballs skewered …

TALL KNIGHT (irritated): “Is” is all right … You wouldn’t get far not saying “Is”!

SIR ROBIN and his SINGERS appear in the clearing. The SINGERS are going on cheerfully as usual and ROBIN walks in front of them, continually embarrassed at their presence.

SINGERS: … and his kidneys burnt and his nipples skewered off …

ROBIN holds his hand up for silence.

He shakes his hand warmly.

ROBIN: My liege! It’s good to have found you again …

ARTHUR: Where are you going good Sir Robin?

ROBIN’S SINGERS (starting up again): He was going home … he was giving up, He was throwing in the sponge.

ARTHUR: No … it lies beyond this forest.

OTHER KNIGHTS: Stop saying the word! The word we cannot hear! The word …

ARTHUR (losing his patience with the fearful KNIGHTS OF “NI”): Oh, stop it!

Terrific confusion amongst the KNIGHTS OF “NI”, they roll on the ground covering their ears. The TALL KNIGHT remains standing trying to control his MEN.

OTHER KNIGHTS: They’re all saying the word …

OTHER KNIGHTS: You’ve said it! Aaaaarghhh! … We’ve said it … We’re all saying it.

ARTHUR beckons to BEDEVERE and ROBIN and they pick their way through the helpless KNIGHTS OF “NI” and away into the forest.