MIX THROUGH one or two shots of them on their way again, until they approach a terrific castle (a little one would do too). They advance quite close to the castle and draw themselves into a line. At a signal from ARTHUR the two PAGES step forward and give a brief fanfare.

A MAN appears on the battlements. ARTHUR addresses him.

ARTHUR: I am King Arthur and these are the Knights of the Round Table. Whose castle is this?

MAN: This is the castle of of my master, Guy de Loimbard.

ARTHUR: Please go and tell your master that we have been charged by God with a sacred quest, and if he will give us food and shelter for this night he can join us in our quest for the Holy Grail.

GALAHAD: He says they’ve already got one!

ARTHUR: Are you sure he’s got one?

CUT TO BATTLEMENTS. THE TAUNTER (MAN) turns to some others.

MAN: I told him we already got one. 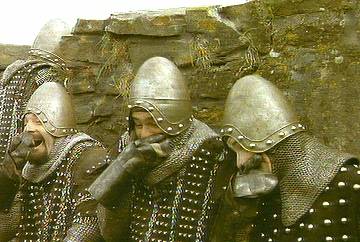 ARTHUR: Well … can we come up and have a look?

MAN: Of course not! You are English pigs.

ARTHUR: Well, what are you then?

MAN: I’m French. Why do think I have this outrageous accent, you silly king.

GALAHAD: What are you doing in England?

MAN: Mind your own business.

ARTHUR: If you will not show us the Grail we shall storm your castle.

MAN: You don’t frighten us, English pig-dog! Go and boil your bottoms, son of a silly person. I blow my nose on you, so-called Arthur-king, you and your silly English K…kaniggets.

He puts hands to his ears and blows a raspberry. 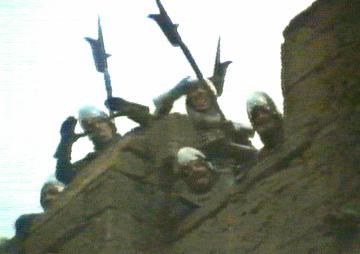 GALAHAD: What a strange person.

MAN: I don’t want to talk to you, no more, you empty-headed animal, food trough wiper. I fart in your general direction. You mother was a hamster and your father smelt of elderberries.

GALAHAD: Is there someone else up there we could talk to?

MAN: No. Now go away or I shall taunt you a second time.

ARTHUR: Now this is your last chance. I’ve been more than reasonab…

CUT BACK TO battlements. A cow is led out of a stall.

CUT BACK TO ARTHUR.

ARTHUR: Now that is my final offer. If you are not prepared to agree to my demands I shall be forced to take … Oh Christ!

A cow comes flying over the battlements, lowing aggressively. The cow lands on GALAHAD’S PAGE, squashing him completely. 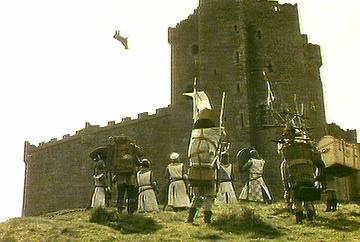 ARTHUR leads a charge toward the castle. Various shots of them battling on, despite being hit by a variety of farm animals.

ARTHUR (as the MAN next to him is squashed by a sheep): Knights! Run away!

Midst echoing shouts of “run away” the KNIGHTS retreat to cover with the odd cow or goose hitting them still. The KNIGHTS crouch down under cover.

ARTHUR (restraining LAUNCELOT from going out and having a go): No!

BEDEVERE: I have a plan sir.

CUT BACK TO battlements of castle. FRENCH SENTRIES suspiciously peering towards the English lines. Wind whistles.

Shot of the empty scrubland or undergrowth or woodland around the castle. Emptiness. Wind. More shots of the FRENCH SENTRIES peering into the dusk.

During all this the sounds of extensive carpentry have possibly been heard, followed by silence, followed by renewed outbursts or activity.

CLOSE-UP FRENCH looking very nervous. Dawn breaking. Shot of woodland. Nothing. Wind. Dawn still breaking. Shots of the FRENCH. They suddenly hear something. A faintly detectable squeaking which is getting louder.

CUT TO WIDE SHOT of castle and woodland. Squeaking getting louder. Shot of the FRENCH TAUNTER pointing. WIDE SHOT again. The squeaking gets louder an enormous twenty-foot-high wooden rabbit is wheeled out of the undergrowth into the open space in front of the castle. The ENGLISH scuttle back into the undergrowth. The rabbit has a large red bow tied round it and a rather crudely written label, which reads “Pour votres amis Francais”. The CHIEF TAUNTER looks at it, narrowing his eyes. Then he turns and leaves battlements. 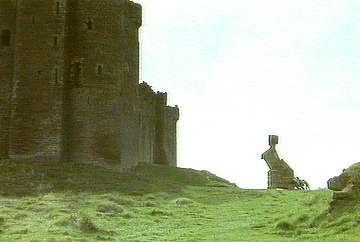 CUT TO ARTHUR and COMPANY watching from the bushes. The main gate of the castle opens a little and the CHIEF TAUNTER’s head sticks out, then another Froggie head, then another. They mutter to each other in French, look rather pleased, then rush out and start to pull the giant rabbit in.

CUT BACK TO ARTHUR and COMPANY behind some bushes watching.

BEDEVERE: Well now, Launcelot, Galahad, and I wait until nightfall and then leap out of the rabbit and take the French by surprise, not only by surprise but totally unarmed!

ARTHUR: Who … Who breaks out?

BEDEVERE: Look, if we were to build a large wooden badger… 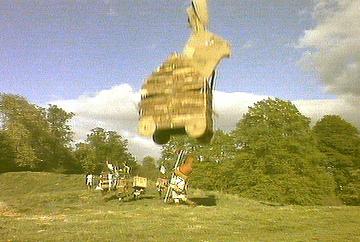 They continue to retreat. The rabbit lands on GAWAIN’S PAGE who is already weighed down by enormous quantity of luggage.